A new look for Nova – time to tell the world

Along with recruiting new staff we’re also developing the way we promote the business. In the past all of our work was through referral – a great way for us to grow within the city and the region – but now we’re pushing wider with the aim of establishing Nova as a leading film production company in the North.
Part of that push involves a revamp of our marketing – new newsletter, work on the website, a new logo and (bit by bit) a new look that will eventually permeate through our marketing.
Why…
You might argue with this statement, but before Hull became city of culture, one of the defining characteristics of Hullishness was a reticence to shout loudly about what you’re good at.
In ‘This City Belongs To Everyone’ the film we made that helped Hull to win the bid, one of the three ‘rules of Hull’ in the script was “Don’t talk about it, get on with it.”
It was an idea that a lot of Hull’s creatives will identify with.
There was always a sense that Hull was a forgotten city, that we were all here getting on with what we believed in, but why bother shouting about it when the rest of the world seemed so determined to ignore us.
So everyone hunkered down and carried on regardless.
Becoming city of culture changed that. In the last four years we’ve realised that we’re not forgotten, the rest of the world does give a toss, and not only that, but they actually really like us for who we are.
Hull’s no longer the ugly duckling – hey, it’s a very fine swan indeed (RIP Danny Kaye).
So maybe it’s time to be a little bit more confident about what we’re good at. Tell the World – why not?
So at Nova we want to be a bit less backward about coming forward. Hence the newsletter, a stronger push in our marketing and – tah-dah! – the new logo. Here it is: 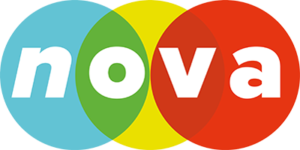 We wanted colour, we wanted something that hinted at collaboration and diversity, we wanted to be bold. We wanted to express something that speaks about the way we produce work, both aesthetically and in terms of our personalities.  Happy, creative and sensitive to the ways we all affect each other. We like clean, minimal, modernist design – we like sixties stuff: strong colours, shapes and type.
You’ll see some of the influences in the images below. The logo was designed in house – we hope that fact in itself tells you something about our capabilities.
We hope you like our logo, we hope you like us, we hope you get in touch.