Paul Burwell – an update for you

We’re currently in the middle of a long and fascinating project telling the story of the artist Paul Burwell.

Not only was Paul a remarkable person, he was an influential figure in British art, performance and music from the early 1970s until his death in Hull in 2007.

Nova’s story of how one of the most creative and very often dangerous figures in British contemporary art came to a tragic end in a playing field in Hull will explore the reasons why society needs people like Paul who are prepared to explore the furthest edges of human experience, to challenge convention, expand possibilities and involve us in experiences that can change the way we perceive the world.

Hull’s year as City of Culture demonstrated that art really does change the way that we think about the world.

Our year in the spotlight changed how we think about ourselves and how the rest of the world thinks about Hull.

2017 restored our sense of identity and self-belief and proved that Hull is a place where people from all backgrounds are open-minded, curious and willing to explore.

And when Paul Burwell moved to the old Kingston Rowing Club boathouse at the end of Oak Road Playing Fields in 1999, it was those qualities he found in a city which just 20 years ago felt like it was on the edge of the world, in danger of falling off completely.

Paul’s background was pretty unusual. His parents had divorced when he was young – mum was a dancer, dad the set designer for the first series of Dr Who. After attending the merchant navy college on the Thames at Greenhithe Paul took jobs as a gravedigger and a strip club musician before getting into art college on the strength of his skill as a drummer – possibly the first ever fine art drummer, building foundations for a new artform which would come to be known as sound art.

This was the late 60s. Consciousness was being expanded, man, and if pushing the boundaries was what you wanted to do then you were living in a good time.

One story tells of Paul taking acid every day for month. Others tell of Paul looking fairly deeply into the dark side of magick and ritual. With musician David Toop he was taking a shamanistic approach to sound, performing with the avant garde poet Bob Cobbing, making explosions with the pyrotechnic artist Stephen Cripps, exploring performance art and movement with Carlyle Reedy and collaborating with musicians and artists such as Evan Parker, Lol Coxhill, Steve Beresford, Max Eastley, Sylvia Hallet, Peter Cusack and many others who are now acknowledged as pioneers in free and improvised music and sound art. 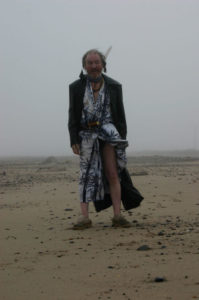 In the midst of all this he was also father to Piers and Titus, and though he’d separated from their mother Sheila, Paul didn’t abandon his children entirely for art (though for Piers and Titus it sometimes felt like the work came first). Paul’s eclectic home – a squat in Bow filled with artworks, instruments, books, swords, knives and guns – was a fun place to be, but it was dangerous too. Titus and Piers remember their dad nearly blowing himself up, igniting explosives packed onto the top of an old German helmet he wore.

In 1983, with the artists Anne Bean and Richard Wilson (who was commissioned to produce the £2.5m Slipstream sculpture at Heathrow, largely manufactured in Hull), Paul formed the Bow Gamelan, a kind-of sculptural performance live art ‘band’ who made site specific installations from junk which they played, hit, set-fire-to and blew up all over the world. During one notable performance arranged by Hull-based musician Dave Ellis at The Ferens in 1984, the fire brigade interrupted the show after Paul and his colleagues set all of the fire alarms and sprinklers off with their smoke and explosions.

Even after the Bow Gamelan went their separate ways Paul continued to produce innovative work – lowered from a crane into the Thames whilst playing the drums, another time taking over the roof of the old turbine hall that is now Tate Modern for yet more percussion and pyrotechnics, and also working regularly in Hull where he maintained strong links with Dave Ellis, Rob Gawthrop, Mike Stubbs and Hull Time Based Arts.

In 1999 Paul and his Hull-based friend Alistair ‘Harry’ Palmer applied for a Year of The Artist grant to make work based along the River Hull… and then naughtily bought the old boathouse at Oak Road fields – the money wasn’t supposed to be used for buying property.

From the Boathouse Paul set about creating a community of artists who were not bound by constraints of money or convention. Endlessly inventive and with unstoppable energy, Paul knew how to make things happen. With a reputation of nearly 30 years working with some truly great international artists – many of whom would come to visit the Boathouse – Paul and those who were drawn to him – would stage regular events, parties and gatherings where it seemed almost anything could happen – trees on fire, swords wielded, strange sounds, dance, poetry and regular explosions, as well as plenty of food, discussion and mutual support.

The boathouse was certainly a productive and inspiring place, but Paul also had a destructive nature. Running toward danger was always part of his approach to his art and his life – his drinking became heavier and heavier, his behaviour more and more erratic, his temper worse and his anarchic outbursts less palatable. Friends started to give him a wide berth never knowing whether they’d get happy Paul or crazy Paul. He died in 2007 after falling over in the boathouse grounds and developing hypothermia.

His life and work continues to influence those who knew him: artists whose profiles range from the internationally famous to those who are happy to remain under the radar.

It’s a strange and amazing story to tell, one which mixes magic, music and art, it sails into some dark places but there’s laughter and explosions along the way. And more than anything it tells the story of a true artist, a creative genius who lived to push the boundaries. If there’s a part of you that knows there’s more to life than telly and the 9 to 5, then Paul’s life and work is the other side of that coin.

Paul Burwell’s story belongs to Hull – alongside artists, musicians and iconoclasts like Basil Kirchin, Mick Ronson, Coum, Welfare State International, Shirley Craven, Hull Time Based Arts and others – Paul Burwell belongs to a tradition of pushing the boundaries that somehow found a home in our once isolated, end of the line city.