We were lucky earlier this year to be awarded a large contract with the British Council in Freetown, Sierra Leone, delivering film-making workshops to help develop the country’s fledgling film industry.

Nova has a long history of working in Sierra Leone, having worked in the country on 15 visits since 2006.

Pivotal to our work in the country is our close friendship with film-maker Lansana Mansaray (aka Barmmy Boy), who was nominated for an Emmy last year for his brilliant documentary Survivors which tells the story of the ebola crisis from the perspective of the frontline medical support staff.

So when the British Council issued a tender looking for an experienced UK film company familiar with working in Sierra Leone, to hook up with an established Sierra Leone-based film-making organisation and deliver a series of four film-making ‘labs’ across the year we were excited by the prospect and felt we had a particularly strong platform from which to bid for the job.

And – happily – we were awarded the contract. 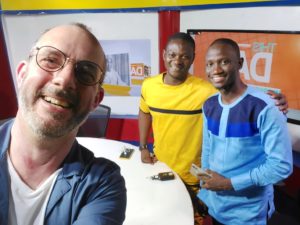 We were also extremely pleased to bring in another friend and colleague to collaborate on the work: Dom Bush of Land & Sky Media is a Kendal based film-maker who recently produced Now But a Fleeting Thing for The Guardian – watch it here:

Dom also has a wealth of experience teaching film, so it was great to bring him into the team.

However, Coronavirus chucked a major wobbly.

By Sunday 15th, while we were sitting in the tropical sun on a beautiful deserted Sierra Leone beach, it was clear that the world was going into lockdown. Our airline AirFrance announced that all flights after Tuesday 17th would be cancelled.

On Monday the UK High Commission advised us to leave – so we booked the next flight and left that afternoon.

We said hello to the Film Lab participants, expressed our apologies, packed our bags and 24 hours later I was back in Hull. We’d been so excited to work with FMC and the young people in Freetown, a city that we love – it was such a disappointment not to be able to see the fruits of our ideas and planning.

However, thanks to the fact that we’d arrived early and worked closely our FMC friends were able to continue for the week. The first Freetown Film Lab was a great success.

The second Lab was due in May –  with the British Council’s support we’ve postponed that until February 2021; and we’re still waiting to see whether restrictions will be lifted enabling us to return to deliver more workshops in August and November.

After 15 years of working in Freetown in close collaboration with Lansana it will be an honour to play some small role in helping to develop film-making skills and create opportunities in Sierra Leone.

We’re working hard on planning for the continuation of Freetown Film Labs – an excellent British Council initiative – whether that means digital delivery of the next workshops or, hopefully, getting our feet back on the ground in Freetown.