Bonjour, Salam and Eh-up to Our New Editor

We are extremely delighted to announce the arrival of our latest full-time team member, the excellent Lina Chaouki (cue round of applause). 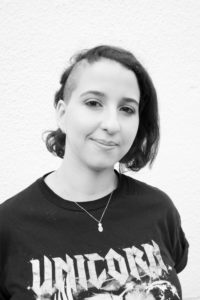 Lina was born in the Moroccan capital Rabat in 1994, her mum a Belgium-born architect and her dad a Moroccan carpenter. After school in Rabat, Lina studied for her film-making degree at the École Supérieure des Arts Visuels de Marrakech: “I had an idea I wanted to be a director but my mum always thought I’d be an actor: I was always clowning, doing voices and having fun, but after the first six months on my course, where we were immersed in all aspects of film-making, I realised I wanted to be an editor.”

It was the combination of the technical aspects of editing with the creativity that really appealed to Lina. Her hero, the legendary editor Walter Murch compared editing to being a midwife, helping to give birth to the directors vision: “I love being the one solving the problems and yelling ‘Push! Push!’ right at the end,” says Lina.

After graduating she moved to Brussels to study a two-year-long Masters in Editing at INSAS (the Institut National Supérieur des Arts Du Spectacle et des Techniques de Diffusion de la Fédération Wallonie-Bruxelles), Belgium’s leading school of film and performing arts; and following that she spent two months on work experience at the National Film Board of Canada in Montreal where she completed her masters thesis on the animator and editor Norman Mclaren.

Returning to Belgium to start on her career, Lina felt she was too Moroccan for Belgium and too Belgian to return to Morocco. “It felt like the right time for a fresh start. I loved documentary and particularly short-form film-making. I had friends in the UK and so I started looking at jobs on LinkedIn – and that’s where I found out Nova were looking for an editor.

Lina’s qualifications were impressive. Not only has she a Masters in editing – and great work in her showreel – but she speaks English, French and Arabic fluently. To be able to edit in three languages is a rare skill: “Nova sent me some footage to take an editing test online and it was exactly the sort of work I love doing – working with real people, helping to tell their stories and make what they’re doing beautiful.

“And not only that, but the whole thing felt just right. The communication was great. Nova paid for me to come to Hull for an interview and when we all met I loved the set-up and the friendly atmosphere.”

Hull might not have been the first place on Lina’s list, but it’s quickly become home. Her start date was due to be the first of April but Covid 19 meant that was delayed until the start of July. After three months effectively shipwrecked at a friend’s flat in London during lockdown, Lina finally got her feet under the desk at Nova and moved into her new flat in Hull: “I always think it’s not the place that makes you at home, it’s the people,” says Lina, “and everybody has been so warm and welcoming. I’m loving the work and the city. It’s great.”

What will Lina bring to Nova? Without doubt she got the job because she was the best editor who applied – so she’ll bring all of her creative skills to that role, increasing our capacity and fitting in with ease.

But along with that she brings a fresh approach and a broadened perspective. Last year University of Lincoln film graduate Callum Mitchell joined the business and he has already made an impact with a great new eye for a shot and fresh pace to the cut. With African-European Lina now also bringing her new flavours to the mix, the Nova team continues to grow, diversify and strengthen.