At Nova we’re always investing and growing to meet the needs of our clients.

We believe that a diverse team with a mix of ethnicities, gender, age and abilities is the best way to bring fresh eyes and fresh ideas to our clients.

Of course, as a film-making company, great visuals and story-telling will always be at the heart of the business. And in a small team like ours we need everyone to be adaptable and multi-skilled.

So we’re proud to welcome journalist Barney Stephenson to the team in a role we’re loosely calling ‘producer’, though in truth the job is producer/account manager/researcher/editor and more. 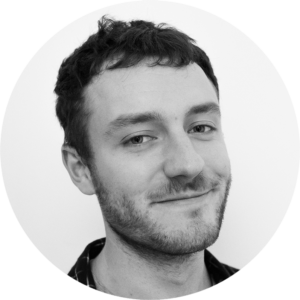 Barney, 25, graduated from Manchester Met with a first in history and politics after completing a dissertation which explored how football has been used to promote nationalist politics through the ages. He then spent a year gaining a Masters in Journalism at Sheffield University – his final project was a long-form piece of journalism  focussing on the legacy of Hull’s time as City of Culture.

After a year working as a reporter for the Hull Daily Mail, Barn was persuaded to join Nova, as director Alan Jones explains: “During the last two years our workload has increased massively. In addition to me and Matt, we employed Callum Mitchell as another full-time shooter, and then Lina Chaouki as a full-time editor.

“The thing we needed was someone else who would work closely with clients, research and produce films, interview participants, and cut audio to tell stories. Barney’s experience as a journalist, combined with his interest in politics, art and popular culture made him an ideal fit.”

Sharing three degrees (with two firsts) and two Masters in film-making and journalism between them Barney, Lina and Callum have the qualifications to match their youth and undeniable flair, complementing Matt and Al’s experience, style and vivid good looks.

Barney also happens to be Nova director Matt Stephenson’s son, so be prepared as Nova embarks on creating a global media empire with its roots firmly planted in Hull.