Crikey, what a year it’s been. A year of ups and downs and all sorts of weirdness.

We started the year with interviews for the role of editor – and we were over the moon to appoint the excellent Ms Lina Chaouki. Lina, who was previously based in Belgium, was supposed to start in March but whats-it happened so she joined us in July after getting stuck in a friend’s flat in London. Welcome Lina – not only does she edit films, but she bakes too. Top work.

The year also started with a big contract with the British Council, which would have seen us delivering four ‘Film Lab’ workshops in Sierra Leone with our good  friends at Freetown Media Centre. We travelled to West Africa for the first one, but then thingy was announced and we had to fly home at very short notice. The labs have continued through the year but with us beaming in and delivering sessions over Zoom – which nobody had heard of until you-know started.

‘The thing-that-happened’ made a big impact on the business. We experienced an explosion in work as our clients found they needed even more online content – and as a result we’ve been busier than ever. Through the first bit-where-no-one-was-allowed-out we made thingy-safe content for Hull City Council, Hull York Medical School, the University of Hull, Spencer Engineering, KCOM, Back to Ours and more as well as helping the huge Bradford Literature Festival and Freedom Festival move from completely live and venue-based live to online and living room-based – all at very short notice.

And then when we were allowed back out and we all returned to the office, the work seemed to double again with jobs coming in from the Sewell Group, East Riding Council, Opera North plus more from the University, KCOM, Spencer…

So much so that we needed an extra pair of hands… so journalist Barney Stephenson joined us in October. He doesn’t bake, but he produces, interviews and edits – and when pressed he’ll make a cuppa too; another talented  and young member of the team to join Lina and our top shooter and cutter Mr Callum Mitchell – add the beautiful older hands Stephenson and Jones and Nova Studios Ltd is a team of five. 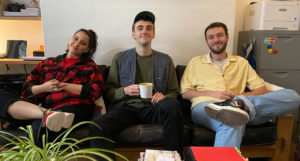 But at the end of the day, when all’s said and done, Covid – oops, I said it – has been a right bastard. Business aside, we’ve experienced the virus at close hand – Matt’s dad passed away early in the first lockdown, Matt and his partner Annie both had the virus, nearly all of the team’s partners work in education so they’ve all had a hard time.

We’re as sick as anyone of the isolation from friends and family, the constant cleaning and the shifting goalposts that this year has brought. And the impact of the virus on the city itself is only just starting to be felt…

It’s been tough and testing but having great colleagues and great clients has made things so much better. And – finger’s crossed – we’ve got our work and our health.

Best wishes and happy new year to everyone. Let’s wish for togetherness, health and let’s help put our climate first in 2021 and beyond.