“The notebooks were bulging and brains were buzzing” – Nova’s digital and creative skills project with Hull: Yorkshire’s Maritime City off to superb start

Nova’s digital and creative skills project in collaboration with Hull: Yorkshire’s Maritime City is underway and off to a flyer.

Bringing together some of the city’s best creative minds, the programme will see the work of 20 writers, film-makers, musicians and artists, all aged 16-25, culminate in a film promoting Hull’s Maritime City status.

It’s an opportunity for an emerging generation of creatives in the city to develop their portfolios, harness new digital skills and explore their own identities as Hullensians.

It all started this month with the writing group led by author Russ Litten.

Here’s his account of the crucial first stages of the programme.

Our first day started with a tour around Hull City Centre, guided by the fountain of local knowledge that is Paul Schofield. Paul’s knowledge of the history of our city is as detailed as it is impassioned, and he gave cause for us to look at the landscape through different, older, eyes. People often urge you to look upwards if you want to see the history of a city. As Paul pointed out, you would be as well advised to look down as well. I must have walked over the plaque marking the original site of the Wilberforce Statue on Monument bridge a thousand times and never known it was there. Travelling from the famous Beverly Gate remains, we followed the pavement markings of the city wall of ancient days, past Queens Gardens and beyond the old Art College to several submerged corners and rusting crannies, revealing partially hidden nuggets of narrative. A vision of Queens Gardens as a body of water bristling with boats. The words of Robinson Crusoe from the eponymous book that arguably kicked off the English novel – “Had I the good sense to remain in Hull …” The heads of the star-crossed Inuit couple immortalised in Stefan Gec’s statues just south of Myton Bridge. There were stories at every turn. 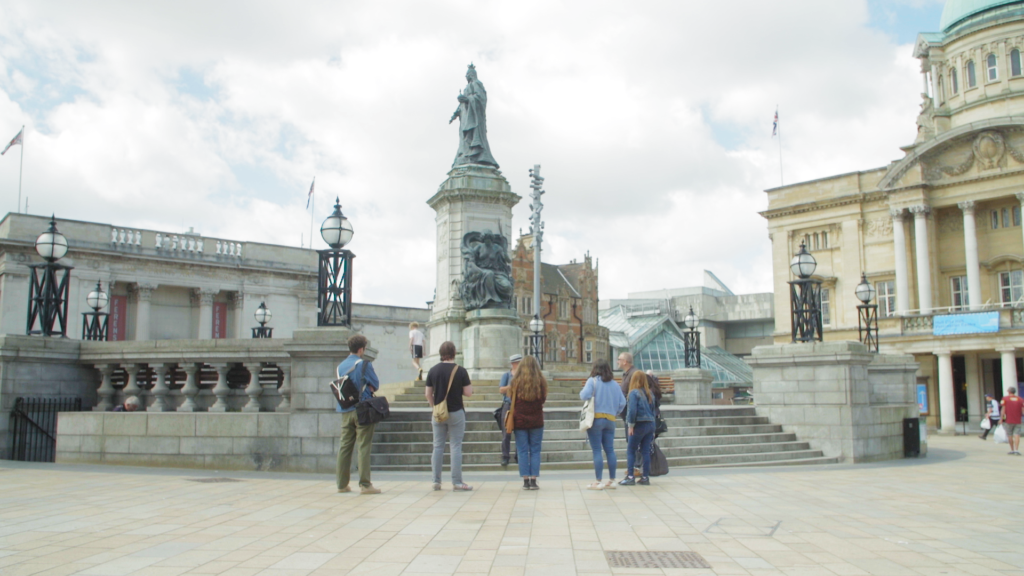 Once we had completed the tour and had some lunch we set down to the business of decanting our morning’s input onto paper.

A word about our coal-face for the project – Juice Studios is a fantastic space in which to hold a workshop – light, airy and spacious, with a rooftop patio section that peers out at the rear of the Marina from between neighbouring warehouse loft look-outs, slopes of red tiled rooftops and the occasional passing seagull. The weather was fine and sunny.

Alice and Joe at Form, the shop below, are fine hosts, providing us with quality writing materials and endless cups of Colombian head-soup. 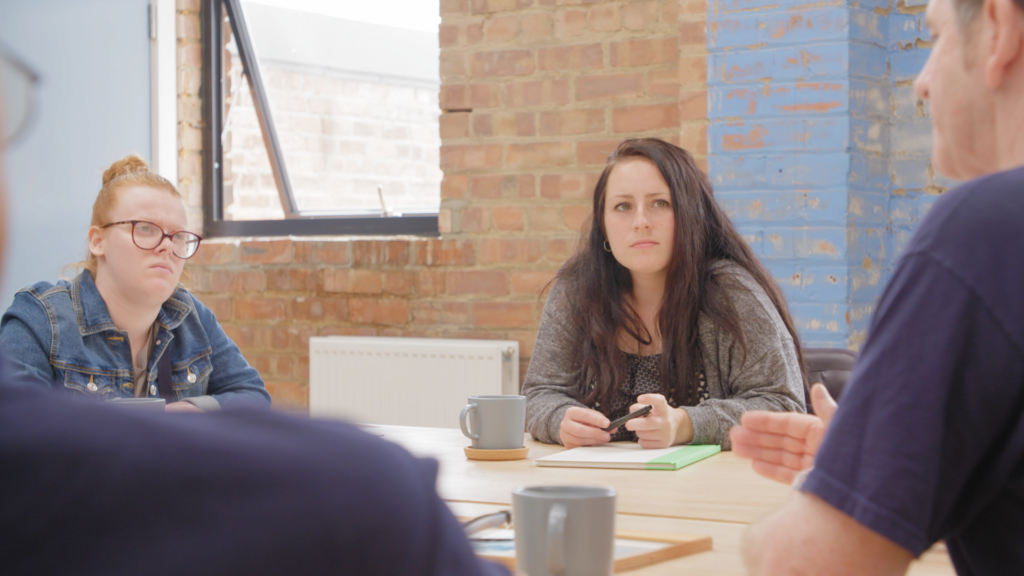 Our initial discussions threw up some good angles – work, love, family, loss, longing, rats, war, rebellion, romance and mud. We applied these themes to various writing exercise, threw a few lumps of word-clay on the wheels and witnessed what transpired. We did a fair bit of scribbling. It was important to get our marks down. The notebooks were bulging and brains were buzzing.

The next Saturday we were visited by Jean Shakesby, one of the original “Lil’s Lasses”. Most of the writers were familiar with this piece of our local history, the campaign of Lilian Billocca is a story often told, but hearing Jean’s first hand account of events had the room transfixed. Her words took us back in time and we were there, marching along with those silent women, part of five hundred representing a working community of thousands. Jean showed us the telegrams sent from her husband from Artic waters. A maritime epistolary love story, borne, of work and sacrifice and bravery. Jean’s passion fired us up. The writing started to take shape. Themes were expanded upon, other influences brought into play. We pulled it all into focus. Things were starting to link up. 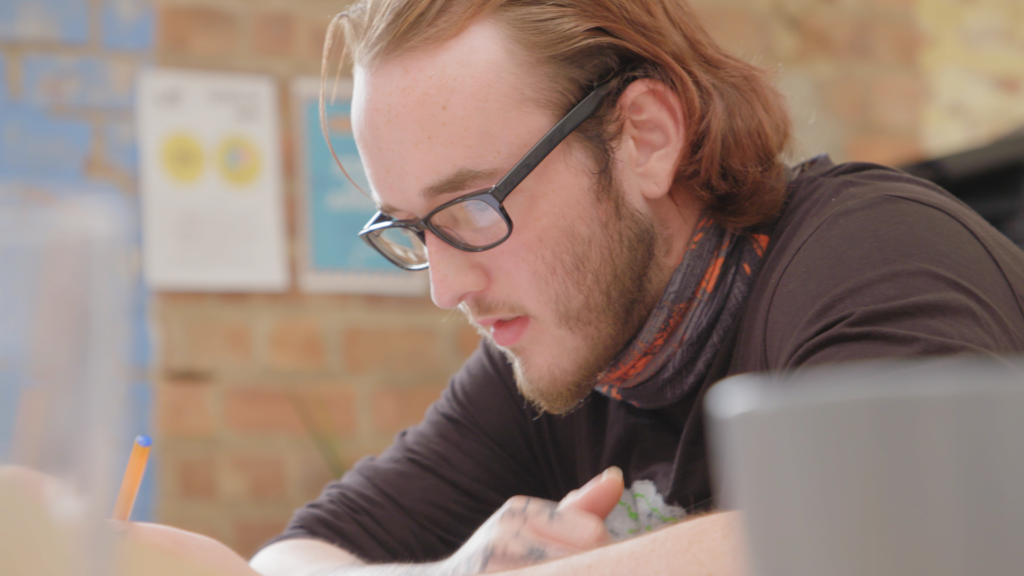 The writers had, by this point, all settled on one or two pieces to work on. The idea of this point was to green light everything and get as many words down on the page as possible. Next week, we were going to edit, but at this point it was all about getting the flow on. Fortified by pizza and tea, we wrote until our wrists ached. Then we took the words and slept on them, left them alone until the next time, when distance would afford us some perspective.

We were joined on our final day by Gerry and Ray from the Bullnose Heritage Group. Jerry and Ray are both fishermen who have seen the very best and worst of life at sea. We talked about masculinity, politics, community, international espionage and vegetarianism. Another haul of food for thought. Callum from Nova filmed us as we spoke.

The rest of the afternoon was spent fine-tuning our pieces. The thoughts and images of the previous three works were considered and we tried to edit as much as possible, strip away the superfluous words until what remained was razor sharp and gleaming. 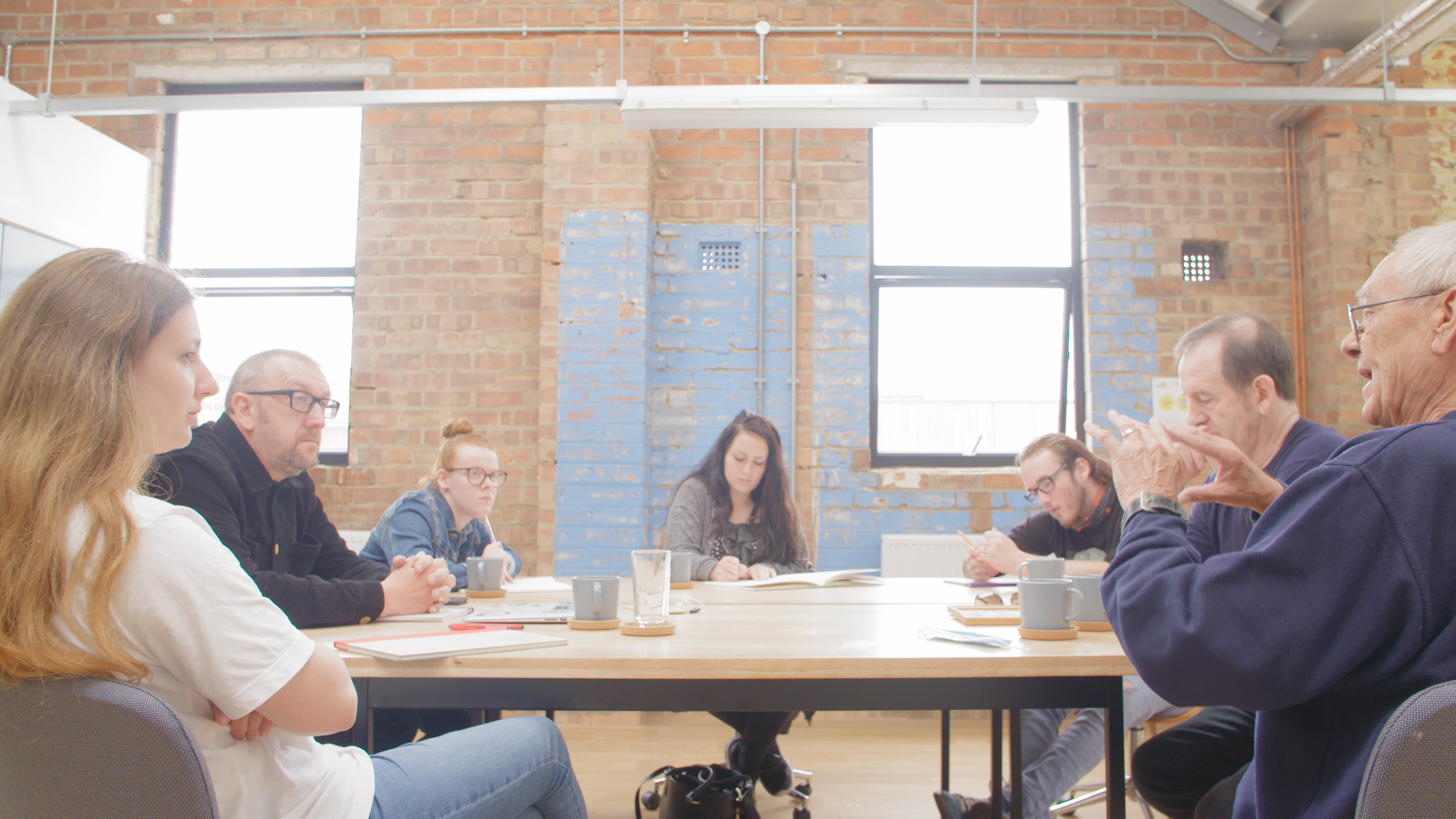 To find out about how you can apply to be involved in the visual arts, film-making and sound groups, click here.